I regret to say

Kuwait is nothing but a city, there is no such nation as Kuwait, we are not equal under law, rules don't apply on some, opportunity is not for everyone. but anyone can get a loan to be enslaved by the financial system.
so why do "liberals" stress on national unity?
Because they have no other identity, no other bond to hold a diverse weaver of ethnic groups, but an identity of a fake unity. and thats the problem with a shallow doctrine and mislead followers of the mirage.
If you look at the royals, so to speak, and their continuous effort to promote national unity,at a time of disunity, is nothing but a survival effort.
I dont see the other masses troubled about national unity, they have their tribal bond.
the future will continue like the past. the unification of interest is what will hold the bond for years to come. the gap is growing steeper, God knows when will it collapse.
Yes,.. i dont know what the future is like, it sure is dark. then again there is no reason for it to be dark, if God have bless it with such wealth, why should the future be so dark?
Thank you.
Posted by error at 1:06 AM 10 comments:

Why don't I have anything to write about?

I have came to conclusion that I either have nothing to write about or nothing that I would want to share. So am I selfish for doing so?

I don't know, but the lack of motivation to blog these days really swept into me, there are plenty of issues one ought to comment on. But then again the whole situation of Kuwait is really bad. The future is just dark for my country, our leadership is old and incapable of delivering anything, politicians are childish and stupid, they literally did nothing for kuwait.

I will vote
calls from the cartoonist not to vote is just plain wrong, its your duty to vote, in an ideal situations, thats all you're required to do as a citizen, pursue your life. Life is not shaped by politics, politics only delays what is destined. This is my latest conclusion.

Best way to evaluate a candidate

ask him who will he vote for..

Okey “her” also, but you should vote for her anyways.

I'm still undecided on the rest of my 3 votes. Last year I came to regret some of the votes I casted. But this time I think there are more genuine people to choose from.
Posted by error at 11:13 PM 3 comments:

P.S. Is it my house or does those light bulbs wear out quick?
Posted by error at 8:55 PM 1 comment:

The religious individual and the dilemma to society

Since religion works on a reward system, more good deeds "7asanat" than bad deed "saye'aat", is good for you and is the only way for paradise, then certainly the more good deeds you do the better of you are once you die. Therefore, all your behavior is influenced by this idea.

So if one had the opportunity to do a good deed, wouldn’t he do it? I would, and so would you. Given that you're a normal human being!

So how can I get more good deeds? Just follow what god wants you to do, do good. That seems easy.

So, if I segregate boys and girls in schools, deny her the right to vote, ban her from driving, like in Saudi Arabia and make her wear the Hijab like in Iran also, soon in Kuwait. That must be good.

Religion needs to function for the benefit of society. The driver of religion was the individually motivated gainer, or the minority group of gainers where as the society as a whole never benefits. And if you pay attention at a micro level, the amount of individuals losing the opportunity of free will and a chance to decide, can lead to a behavior counter to what religion was meant to achieve.

And if you continue to do what you think god wants you to do while you take no notice of the issues concerning society then you are mistaken. 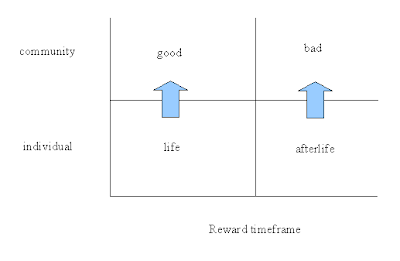 error: but this will not solve the problem! i said
Legislator: I shall do what pleases god. he answered


If an individual takes an action that will effect the community motivated by an afterlife reward then the action will output a negative result for that community.

Also if that same individual takes an action that will effect the community motivated by a reward in any given lifetime then the action will output a positive result for that community.
Posted by error at 4:04 AM 9 comments:

The future of my country shouldn’t be a family affair!

Why do I have to pay the price of a failing country while I have no sovereignty over my future, my present and my land?

I refuse such reality! This is my destiny and I shall shape it the way I see fit no matter how it costs me.

We have no right to decide who shall be the head of government, but to deny my right, to hold him accountable, is not acceptable. Therefore it is not a family affair.
Posted by error at 1:58 AM 3 comments: